Plan for OUR Future

Did you know the Whitsunday Regional Council is about to increase building heights in Airlie Beach? Residents thought (mistakenly) that the Airlie Beach building height issue had been dealt with in the original round of community consultations, feedback and submissions.

The council has made a submission to the Local Government Remuneration and Discipline Tribunal, seeking a switch from a category 4 council to a category 5.

In its submission, the council argues that it is outperforming category 5 councils – and highlights its success in attracting tourists and Chinese investment.

“Currently, council is faced with Chinese investment (either committed or proposed) in the region approaching $2 billion,’’ it says.

One of those investors is Raymond Wang, who is planning a Chinatown-style development, including a hotel, apartments and luxury brands discount outlets village on land he successfully tendered to buy from the council.

The site is zoned for up to five storeys, but would increase to eight under proposed planning scheme changes.

Read the full story on the courier mail website

THE Crime and Corruption Commission has been called on to investigate Whitsunday Mayor Jennifer Whitney’s links to a businessman planning a Chinatown style development at Airlie
Beach.

And The Sunday Mail can reveal that a cultural communications officer employed by the Whitsunday Regional Council to liaise with developer Raymond Wang and other potential Chinese investors previously worked for a company co-owned by the businessman.

Queensland University of Technology Professor Mark Lauchs, an expert in local government ethics, alleged there was a clear conflict of interest for the officer, Cherry Cai.

And he claims the Mayor also overstepped the mark by continuing to meet and dine with the businessman, having declared a conflict of interest and abstaining from council discussions and votes involving the $300 million project.

Excerpt from an article in the Sunday Mail (QLD) October 25th 2015:

“TROUBLE is brewing in paradise with residents of the idyllic resort town of Airlie Beach accusing the council of putting the interests of Chinese developers ahead of locals.

Whitsunday Regional Council Mayor Jennifer Whitney has become embroiled in the controversy, having declared a conflict of interest in relation to a company planning a $300 million Chinatown complex, but denies any financial interest or favouritism.

Proposals in the council’s new draft planning scheme would lift building height limits from four storeys to eight in much of the town’s commercial area and to 12 floors at the Port of Airlie.

“It will destroy the unique, charming, iconic lowrise low density character which attracts people to the town – and turn it into another Sunshine Coast or Gold Coast,’’ said Roger Down, spokesman for the Fight for Airlie group which has gathered 800 submissions opposing the plan.

The council has been working to woo Chinese investors to the tourist region for the past couple of years and opponents of the rezoning claim it is designed to suit them.

Cr Whitney said the council was keen to boost the region’s economy and job growth and any changes would be to benefit the whole area, not individuals.“Even though there’s some angst with building heights, people should be excited that the Chinese are interested in investing in our region,” she said.

One potential winner from raising height allowances is Whitsunday Chinatown Investment Pty which plans a $300 million Chinatown commercial, retail and residential development, with buildings up to eight storeys, on land it bought from the council last year.”

Fight for Airlie continues lobbying at local and State level

The Fight for Airlie group delivered over 800 signed submissions from the local community to the Whitsunday Regional Council offices on Thursday 15 October, before the Friday closing date for submissions on the Draft Planning Scheme.

Kirsten Grace, who scanned all the submissions and delivered them to Council, said “The Community response has been enormous considering Council has given an inadequate time for genuine community consultation. In addition to all the submissions I lodged I know that hundreds of other concerned residents and property owners have also lodged their own submissions with Council. The people of the Whitsundays are not satisfied that their long history of objecting to excessive development has been ignored yet again. This town has fought to preserve a village feel and we don’t intend to lose it now.”

In addition to all the paper submissions, over 800 people signed the change.org petition online. The group also conducted a survey to provide some constructive feedback to Council. The results showed that 80% of residents and 67% of visitors were opposed to the 4 storey height increase and 100% of respondents were opposed to 8 and 12 storey development. 69% of visitors said that if the town plan were to proceed that it would affect their future plans to return.

People can still sign the online petition and the Fight for Airlie group is continuing to survey locals and visitors for their representations to State Government Ministers. The Fight for Airlie Group requests that Council clearly outlines the process now submissions have closed and precisely inform the community when, how and who will review these submissions and advise how issues raised and decisions will be incorporated into changes to the draft plan in the coming months.

The hope of the newly organised group is that all Councillors will pay attention to the concerns of the community, respond to suggested changes to the draft plan and act in an open and accountable manner. Mr Roger Down, another member of the group said, “There has been deep dismay in the community at the lack of consultation and we hope the Councillors have heard us loud and clear. It’s not just local residents who care about this issue. We have heard from people all over the world who love this special town and want to see sympathetic development within the environment we have successfully created to now. The village atmosphere is our point of difference and we need to maintain it.”

We will be there again on Thursday morning (22 Oct)  at 8:45 for the Special Closed meeting, hope there will be a big roll up from other groups including all the Airlie Beach protesters with all their signs objecting to the increased heights as well as protesters from Bowen and National Media. 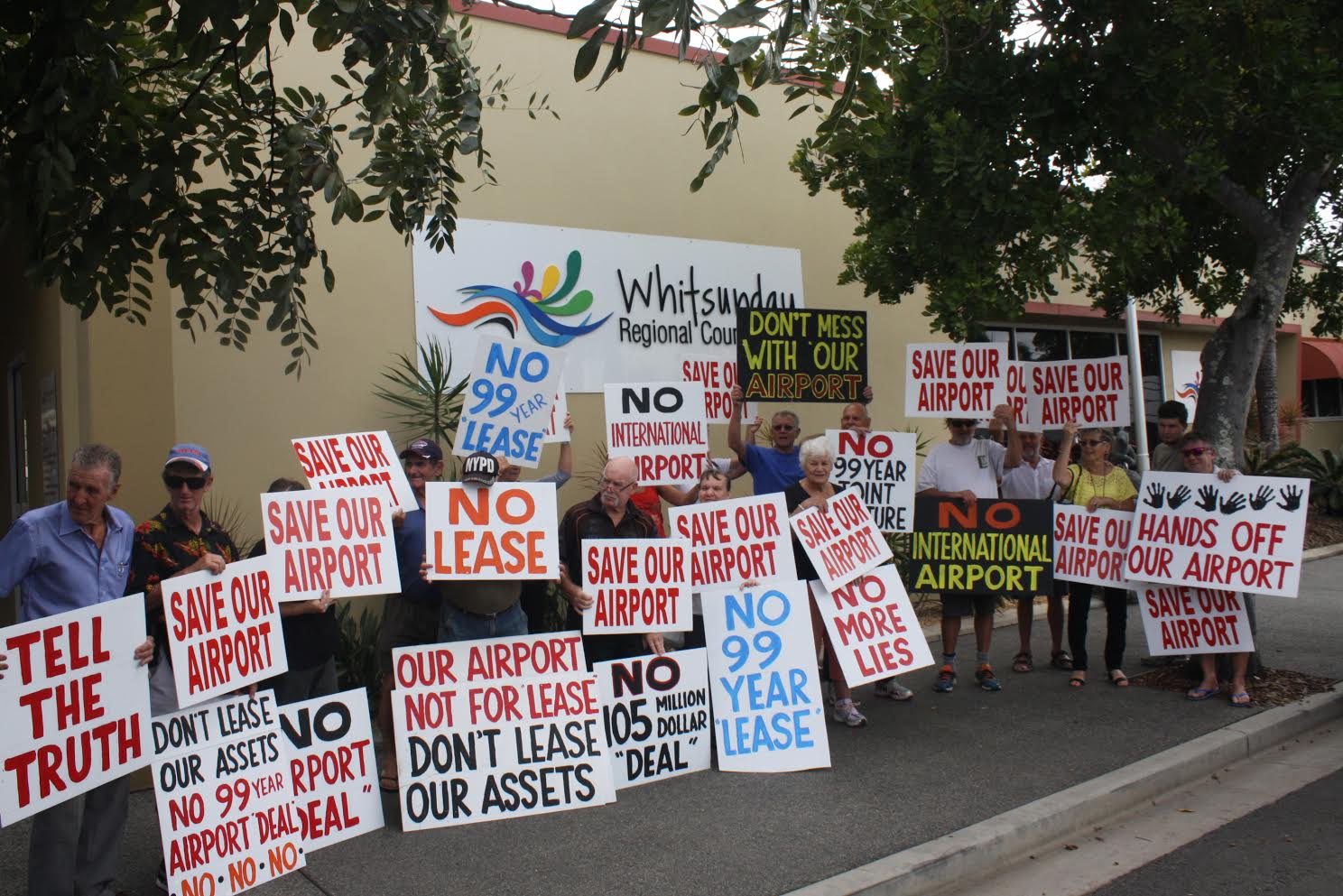 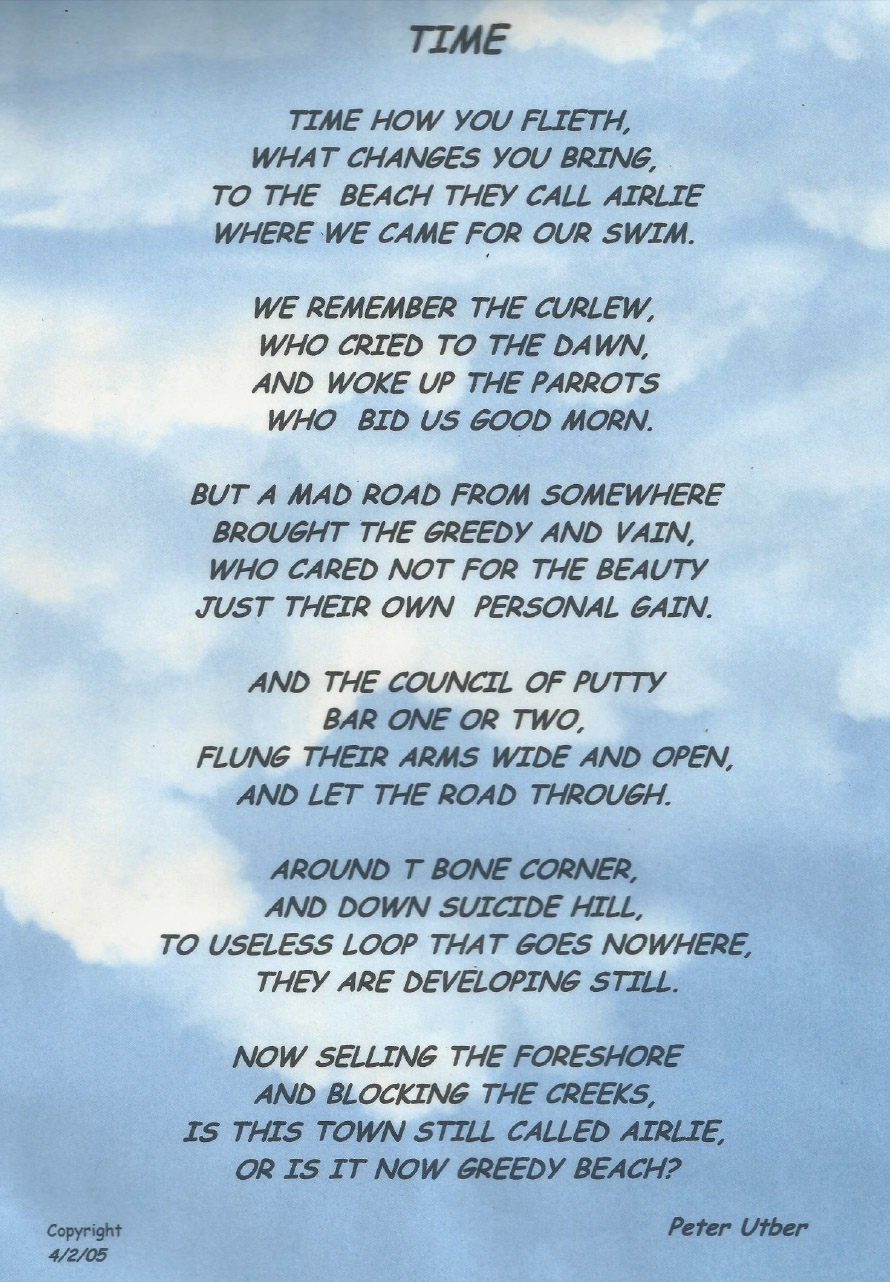 Petitions and the rally have shown Councillors that the general public is not in favour of their draft planning scheme; But the ONLY method the council have allowed for the public to provide their thoughts on the draft plan is a written submission.

An example submission is available below for download. It’s provided in 3 different formats, the content of each letter is identical. The letter will need editing before submission to include your details. You can edit the content of the submission, add to it, or use this as a basis for your own submissions.

Document has a total of 7 Pages – Note that ‘preview’ does not display entire document on some ipads, open in ‘pages’ or other editor to see the full letter.

Why would anyone vote against a motion to make proceedings more transparent? 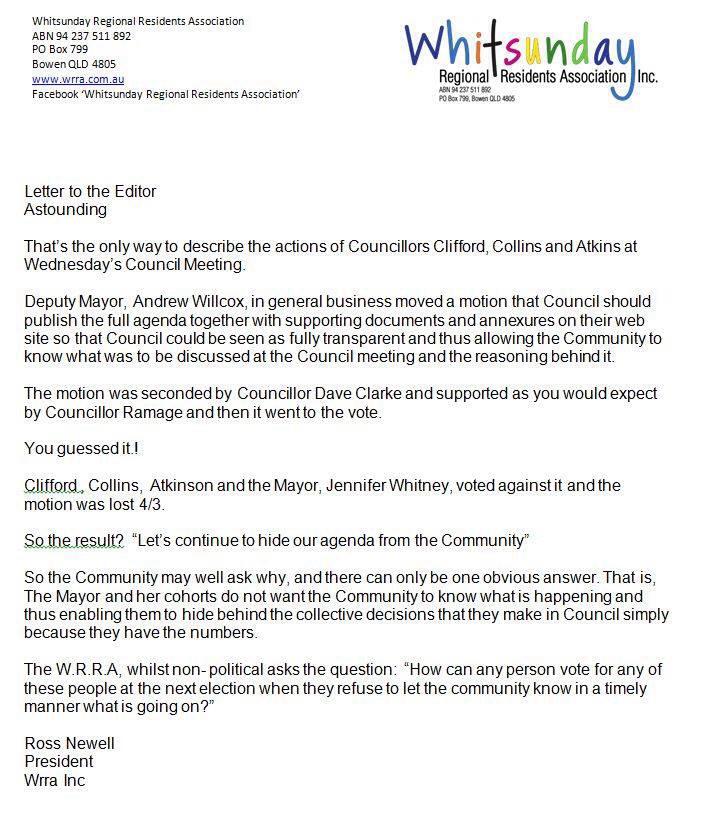 At a meeting on Wednesday 7 October it was decided there was enormous community support and enough issues of concern for the Fight for Airlie supporters to form an organised group.

It is two weeks since the Whitsunday Regional Council held its first public meeting on the new planning scheme and the group has already received over 500 signatures on a petition on change.org as well as over 500 signatures on paper petitions. A rally was organised a week after the public meeting and between 250 and 300 people, based on police estimates, marched through Airlie Beach last Saturday protesting at the planned height changes in the planning scheme.

The Fight for Airlie group is opposed to height changes to buildings in the planned scheme including increases in Airlie Beach to 4, 8 and 12 storeys. They are also concerned that Council has failed to inform the community about these proposed changes in a timely manner and Councillors have not had sufficient community engagement to be able to make a value decision when voting on the planning scheme.

Local rate-payer Roger Down says, “The public meeting on 24 September was a presentation by Council rather than “engagement” and at no time have Council asked the majority of rate-payers and residents for their feedback. We were originally given one week to make submissions on a document the Council has been working on for two years. We need to prevent this from being rushed into Council approving a plan that has not been put before the whole community in a genuine manner.”

Other issues which are concerning to the group is the sale of land in Waterson Way in 2014 as the group believe the Council obviously knew about the proposed height changes and the Council land would have been of more value if sold after the introduction of the planning scheme rather than before. It appears there are also questions to be asked about the terms of the contract on the sale of the land.

The Whitsunday Regional Council has changed the way they inform the community of what is being discussed in Council Meetings to the detriment of the community. Previously full details of all agenda items were available for all to see on the Council website whereas now they are only a listing on the Council website with full disclosure of agenda items only posted on the website when the meeting starts at 9:00am on the day of the Council meeting. Likewise, where public questions were answered on the day when possible, now all questions are taken on notice and are only answered at the following meeting. The Fight for Airlie group questions the transparency of this new management style.

The Fight for Airlie group demand that the public is given the proper respect of comprehensive community engagement and provided with clear and accurate information in a timely manner. The group and individuals will be making submissions to the CEO of the Whitsunday Regional Council regarding the new planning scheme by the deadline of 16 October.  For more information on these issues go to www.fightforairlie.com or the Facebook page www.facebook.com/fightforairlie.